“DO WHAT YOU DO BECAUSE YOU LOVE IT”: A PORTRAIT OF SCULPTOR WAYNE WILLIAMS

Art is everywhere in the Finger Lakes. Inspired by the region’s diverse scenery and lifestyles, artists pursue their creativity outdoors, in studios and in workshops. In the many well-established museums and galleries or at the newer fledgling arts organizations, a wide array of artistic styles and talents are represented. Often the artists, like Wayne Williams, share their artistic skill and passion through teaching at local colleges.

Williams, who is retired after a 35-year career at Finger Lakes Community College, found his calling there. “I didn’t want to teach in public schools,” explains Williams of his career choice. “I wanted to be at the college level. CCFL (the Community College of the Finger Lakes, as it was then known) was literally creating a college, right from scratch.” The year was 1968 and Williams was charged with coordinating the new college’s art program.

Rand Darrow, a CCFL student in that first year, remembers attending Williams’ art classes in a commercial building on Main Street just south of the railroad tracks in Canandaigua. Darrow appreciated his instructor’s relaxed manner. “He was a great teacher,” recalls Darrow, “cracking jokes all the time.” Darrow graduated with a major in Liberal Arts and continued on to SUNY Oswego where he earned a BA in fine arts. He taught art to elementary and middle school students for 30 years.

These days Williams and Darrow typically cross paths at the Wayne County Arts Council in Newark where Williams and his wife, Marleen, are heavily involved. Williams offers classes in figure drawing and sculpture and hangs the gallery’s shows, including his former student’s “Slavic Tales of Novgorod” this past August. “I’d like to take a sculpture class from him,” says Darrow.

In 2003 when Williams retired, the college honored him and another retiring art professor, Tom Insalaco, by renaming its art gallery the Williams-Insalaco Art Gallery. It was known formerly as Gallery 34 to recognize its origins at 34 North Main Street in Canandaigua. Williams held professor’s rank from 1976 and served as director of the art gallery beginning with its opening in 1983.

Williams, who was born and raised in Newark, New York, says he began doing art at about age 8. By the time he was in junior high school his career direction seemed clear. He received local and national awards for his art and a scholarship to Syracuse University, from which he graduated in 1958 with a Bachelor of Fine Arts in sculpture. He continued with graduate work at Syracuse, receiving an MFA in sculpture in 1962. He worked full time as a sculptor until he began teaching.

At one point Williams admits he wanted to be a painter, but didn’t want to adopt the abstract expressionist style in vogue in the 1950s, preferring to pursue the realist tradition. He advises any would-be artist to “do what you do because you love it.”

After graduation he traveled abroad, spending time in Belgium, the land of his ancestors. “My family’s name was originally Willems,” explains the 73-year old who still relishes the time spent in the Flemish countryside. Williams speaks excitedly about art, referencing the lives of great artists. He acknowledges that American artists do not have the same stature as those in Europe, where Old Masters like Brueghel and Rembrandt are national heroes.

These days the energetic Williams, known primarily as a sculptor, is active at the Phelps Arts Center where he is on the board of directors. In mid-September when a group of visitors on a motor coach tour explored artworks displayed in the beautiful church-turned- gallery, they were treated to a large number of Williams’ bronze and metal sculptures, along with his charcoal drawings. “I’ve always loved his work because he deals with things, people, and animals you understand,” says the center’s Director Emeritus Marion Donnelly, who has known him for many years.

Outside the Phelps Community Historical Society, Williams’ life-size figure of a farmer raises his pitchfork above a colorful flower garden on the front lawn. Inspired by the peasants working the fields in Europe, the metal figure is shown with wooden shoes. This is Williams’ largest copper piece, loaned to the Phelps museum in connection with Artistry in Sculpture, a community exhibition in 2009. Williams added a new base using a metal wagon wheel, and topped the figure’s head with a cap.

“We always have referred to him as a ‘farmer,’” says Mary Beth Springmeier, director of the historical society. The work pays homage to the farmers who dominated the agricultural history of Phelps. “Many came across from Europe, including the Netherlands and the Lowlands,” explains Springmeier.

Williams readily admits he is influenced by artists like Millet and Van Gogh, both 19th century painters whose images ennobled the laboring peasant. There were farmers on both sides of Williams’ family and his familiarity with a grandfather’s farm horses is reflected in his realistic rendering of animals.

Williams’ themes vary: bronze sculptures of a cat sleeping on a chair or a nun riding a bicycle demonstrate he cannot be pigeon-holed. In Rochester’s Highland Park, the Vietnam Veterans Memorial includes a figure of a soldier sculpted by Williams. His work is found in many public and private collections and even one local school. A few years ago he created “Cougar” for the North Rose-Wolcott Central School where his figural sculpture, “The Graduate,” was previously installed striding across the courtyard at the high school. Before casting the school’s feline mascot in bronze, Williams created two models. What he calls a more pensive cougar was chosen over a springing pose. Kathy Hoyt, the school’s athletic director, recalls how the student club, the Student Athlete Mentors, raised most of the money for the sculpture through a variety of fundraisers.

Williams’ newest piece, “Sal Pulling,” was created for the September exhibition, Waterway West: A salute to the Erie Canal at Rochester’s Oxford Gallery, an arts business that represents him. The exhibit was planned for the 2010 World Canal Conference held in the city. “I researched mules,” explains Williams, who presented the animal straining forward, pulling the weight of an unseen canal boat. The sculpture’s welded steel frame was covered with copper and then hammered. Later, hot bronze was applied to the surface.

“Mules became the preferred power for the canal,” says Williams. “Pound for pound a mule is stronger than a horse and more sure-footed.”

Williams learned they are extremely intelligent animals and can jump higher than a horse. This attention to detail prepares him for his realistic depiction of the animal.

Wayne County Council for the Arts 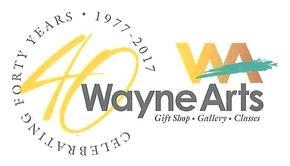 People to Know at Wayne Arts

"If variety is the spice of life, then my life is chicken curry.  I have lived in the midwest, on the west coast, and now, on the east coast, of the U.S. I lived for 12 years in Kenya, where my sons were born.  I have traveled through Alaska, Canada, and Europe. In Kenya, I worked as an outdoor educator for the National Outdoor Leadership School; as a botanist doing research on the flora of an escarpment forest ecosystem in southern Kenya; as a lecturer in forest ecology at the University of Nairobi.  After graduate school in Natural Resources at the University of Michigan, I worked for 11 years in remote sensing, creating vegetation maps from aerial photographs and digital images collected by satellite-borne sensors, and introducing a new technology to everyone in the Forest Service. Along the way, I have been a rock climber, a mountaineer, a sailor, a golfer, a singer, and a folk-dancer.  I have been a mother for what seems like both a long time and no time at all.  I have been an amateur hockey fan, and a surfing fan and now I live on a ranch.

In 2000, I moved into a house on Sodus Bay, which inspired me to get more serious about painting.  I have always loved watercolor paintings, so I thought I would learn how to paint them myself.  I was fortunate to find 3 wonderful teachers. Wendy Gwirtzman unlocked the secrets of watercolor painting in her still life and landscape classes. Steve Carpenter has patiently imparted his knowledge and skill in portraiture and figure drawing.  Wayne Williams has taught me about composition and dynamics within a painting.  Wayne and Marlene have also been my partners in one of the most challenging experiences in my lifetime in revitalizing Wayne County Arts Council.  After a lifetime of doodling in the margins of class notes and meeting agendas, it is both challenging and extremely rewarding to draw and paint on the whole sheet of paper."