Photographs on this website may not be downloaded, saved  or used without the expressed, written consent of the artist. They are for Wayne Arts use only.  Thank you for respecting this.

Wayne County Council for the Arts

​The Wayne County Council for the Arts has a long and proud history of supporting the arts in Wayne County and the surrounding area. 2017 marks 40 years of exhibits, classes, and workshops which have brought enjoyment to all and enhanced the life of our region. WCCA is an all-volunteer organization and we are grateful to our past and present Board, volunteers and members who have kept us going all these years.

+ 1977 - Wayne Arts is established as a non-profit arts council in Lyons, NY

+ 1987 - Wayne Arts moves back to Lyons to a much larger gallery space.

+ 1990’s - Kevin Schooner was the Executive Director and did an excellent job as financial manager and getting lots of good people involved. David Chapin did a fine job as newsletter editor

+ 2004 - Wayne Williams retired from Finger Lakes Community College and became involved in Wayne Arts. He did everything from exhibits to classes and Board recruitment. Chris Fayad took care of publicity, membership, the gift shop, volunteers and grants. Wayne Arts begins to grow.

+ 2006 - The Board grows and Wayne Arts receives a grant from the Rochester Area Community Foundation to develop a floorpan for the Wayne Arts space.

+ 2008 - A board members suggested the front room across from the Gallery Store be used to feature smaller exhibits of works by Members. The board agreed and exhibits were scheduled for March through November.  the works were and still are varied, interesting and attracted visitors.  Our first year featured a jewelry artist, book signings, textile art, and work of students in the oil painting, figure drawing and sculpture classes. In 2012 the little gallery has been renamed the Christine Mori Fayad Members Gallery in honor of Christine Fayad who gave so much time, effort and love to revitalize Wayne Arts when it was in need of some tender loving care.

+ May 3, 2012 - The Members Gallery is dedicated to Christine Fayad, a member, Board member, artist, and traveller. She took an important role in revitalizing Wayne Arts. Chris believed in possibilities and saw the small front gallery as a space to showcase the work of Wayne Arts members on a smaller scale.

2017 - Wayne County Council for the Arts is celebrating our 40th year of supporting the arts in Wayne County. Won't you join us for the next 40 years?!
​ 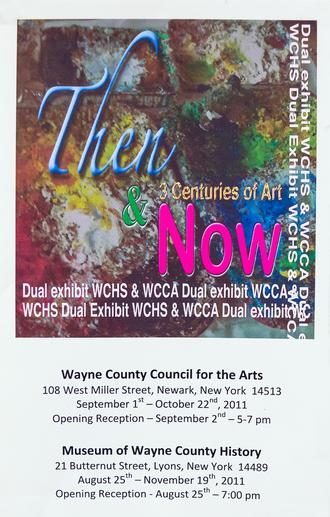 The art of Christine Mori Fayad